The story of the Chaplaincy was once summarized as follows, “…our Lord threw together the elemental gifts of a small group of people, stirred them together and flung this fledging ministry into the community.”

On April 25, 1971 Pastor Gedde, of Richland Lutheran Church (RLC) preached a sermon titled “The Offensive Shepherd.” The primary purpose of the message was to inform the congregation about a strange phenomenon that was occurring in The American Lutheran Church. For the first time in decades there were more persons graduating from Seminaries than there were positions to be filled. The basic question of the sermon was, “Is there anything the RLC can do about this?” 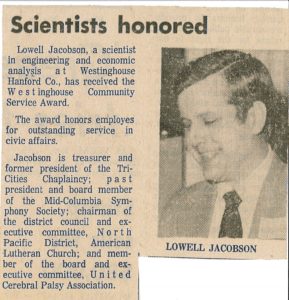 Lowell Jacobson receives the Westinghouse Community Service Award. He was treasurer and former president of the Tri-Cities Chaplaincy.

One person in particular, Mr. Lowell Jacobson, had obviously listened very carefully. Following the service, he approached Pastor Gedde with the request that he would like to visit further about this matter. He felt RLC was large enough to provide some sort of assistance to at least one of these “waiting persons.” A committee titled the “THAT VISION” committee was formed, and Mr. Jacobson was charged with visiting RLC members to enlist not only their moral support but their financial support. By May 30, 1971, the committee had secured all but $75 of their goal. 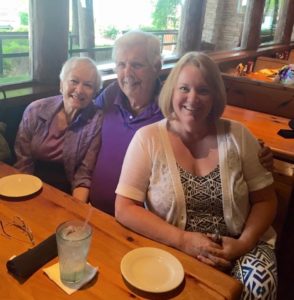 Jennifer Jacobson (Right) with her father, Lowell and mother, Beverly

It was the hard work and dedication of Mr. Jacobson and his committee that paved the way for what is now known, 50 years later, as Chaplaincy Health Care.

As sometimes happens in life, things have a way of coming full circle. Jennifer Jacobson, Mr. Lowell Jacobson’s daughter, now works as a staff chaplain at the very agency her father helped get started.

A Message to Caregivers

A Team Approach to Care