In celebration of our agency’s 50th anniversary, we will highlight the journey of our work, decade by decade through a series of blog posts.

The story of the Chaplaincy was once summarized as follows, “…our Lord threw together the elemental gifts of a small group of people, stirred them together and flung this fledging ministry into the community.”

That “small group of people” were four members of Richland Lutheran Church who put faith into action in the early 1970s. The agency found its identity by serving the needs of the community primarily to individuals who were in crisis, struggling with end of life, death and loss. By the end of the decade, Tri-Cities Chaplaincy became known in the community as the place to go for grief care.

During the mid-1970s, the concept of “hospice,” and the idea of spiritual, emotional, and physical care at the end of life while caring for the whole person, took hold in the United States. In 1974 the first hospice was founded in Branford, Connecticut, and the first hospice legislation was introduced to provide federal funds for hospice programs. The legislation was not enacted at that time. Since Tri-Cities Chaplaincy embodied the same whole-person philosophy of care, local hospitals and United Way turned to us as the most likely organization to provide hospice services in the community.

The board of directors approved the formation of a hospice program and in 1981 the all-volunteer effort accepted its first hospice patient.

In 1984, the board of directors voted to apply to become a Medicare/Medicaid certified hospice. The application was accepted, and hospice services were now eligible for reimbursement and became a funding source for the agency. However, the goal remained to never refuse care to anyone regardless of their ability to pay.

The second new opportunity the agency pursued during this decade was a new program called Clinical Pastoral Education (CPE), a formal training program for chaplains. Leadership saw this program as a way to maintain and grow the service volume for chaplain services and spiritual care required by persons in crisis. Previously the agency relied on a few staff chaplains and lay chaplains from member congregations to help serve the needs of the community. 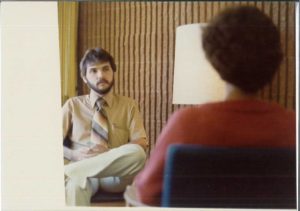 During this decade Tri-Cities Chaplaincy rapidly evolved from a movement to an established organization. The pastoral counseling program was a core service, the agency started a new support group for individuals 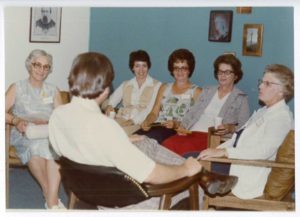 grieving after death by suicide and we became involved in caring for patients with HIV/AIDS through a program call CARES. However, the growth, the acceptance of Medicare funding for hospice and the overall economic situation of the community created challenges that resulted in the departure of many volunteers, staff layoffs (3 persons) and a new tension between ministry aspirations and business realities.

In 1986, the founding Director, Rev. John Moody resigned to “move on to a new frontier.” Under his leadership Tri-Cities Chaplaincy grew into a multi-faceted agency with 28 local member congregations as sponsors, an annual budget of $450,000 and a staff of 20 persons – five ordained ministers; a hospice director and five nursing personnel; five interns in Clinical Pastoral Education (CPE); three office staff and a host of lay chaplains and volunteers. Rev. Moody was succeeded by Geneva Davidson in 1986 and then by Corrine Dodge in 1989.

elp us celebrate! Sign our online guestbook – Share a memory, special experience a prayer or blessing for our next 50 years! Go to: www.ChaplaincyHealthCare.org/50years